25th Anniversary of the Crash

October is a month of crashes.

One of the biggest market crashes took place 25 years ago today. After gradually increasing some 20% in 1987 through the end of September, the S&P 500 began to fall in early October, and then plunged on October 19th. Black Monday. 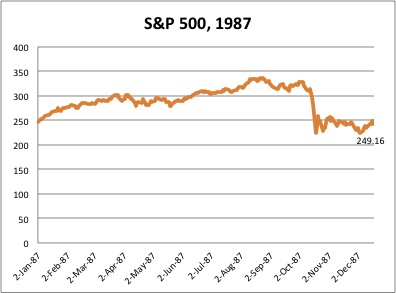 The S&P 500 recovered by July 1989, and powered higher from there. Other crashes had a longer recovery, however. Following the 1929 crash, the market didn’t recover for another twenty-plus years. (There were, of course, massive policy failures such as the Smoot-Hawley tariffs that prevented a more timely recovery, however.)

The question for TSP investors is, will this happen again? Just as there was a crash five years ago, I’m sorry to say that it will happen again. Sometime, at some point in our investing lives, there will be another crash of 30% or 40% or perhaps more. Crashes happen. Whether the next major crash happens in one day or over the course of several months or longer is anyone’s guess, but it will happen. (I discuss strategies to deal with this eventuality in TSP Investing Strategies.) The most important thing, however, is to be mentally prepared.

Marketwatch has a good round-up of the top ten market crashes – you might be surprised at the range of market crashes over the past 500 years. It also has additional commentary discussing the 25th anniversary of the crash, and whether a similar crash could happen again. (Hint: the commentator uses the word “inevitable”…)